Ninety-seven percent of employees believe Business communication has an impact on tasks performed every day.

In Denmark, business communication is as much important as in any other part of the world. In the era of business globalization, where a company is operating in different parts of the world and the people working are from all around the globe, it is imperative to know about the Business Communication culture of different countries. Regardless of the situation and place, communicating without creating barriers can only be an advantage and bring benefits to the company.

The subsections that follow give an overview of Denmark’s business practice to give a comprehensive picture of business communication in Denmark. 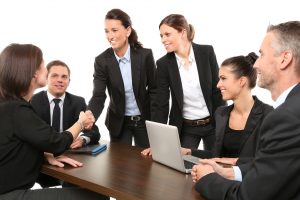 Generally speaking, Business Communication with people from Denmark is generally informal and marked by humor and goodwill, so try to maintain a modest and low-key approach. It is common for the Danes to maintain some distance and unpretentiousness is a keyword in social interaction. You will rarely hear someone promote themselves or their own skills. On the contrary, people tend to underplay their own role and qualifications.

Business communication in Denmark during meetings are straight forward and danish are generally conservative and efficient in their approach. However, Danish business people can appear somewhat formal at first, but they are soon likely to show the  more informal side of themselves. Most Danes speak to their colleagues with an open heart about their private life. They talk about their family and what they do in their holidays and spare time.

Handshakes (with men, women and children) are the accepted form of greeting and Danes shake hands both for greetings upon arrival and departure from a meeting. Handshakes should be firm and short and eye contact should be maintained while shaking hands. Unlike in the United States, men do not stand when a woman enters or leaves a room. Business cards are exchanged but there is no single correct procedure to do this. Business cards should include the street address of your company, not only the post code. You will find that Danes start to use first names quickly. However, you should not use first names yourself until you are invited to do so.

Meetings play a crucial role in Danish business culture as they are the most common way to keep people up to date. Danes like to keep it simple and meetings to be short and well-structured – the less paperwork, the better. However, it is still important for Danes that a written agenda is followed and that all the most important agreements and decisions are recorded in a written summary.

The Danes value their bodily integrity. They are not very fond of being touched by strangers (keep a minimum distance of 30 centimeters).

The official language is Danish, which is one of the Nordic languages. Danish, Swedish and Norwegian are all very similar and the three languages are understood by each of the country’s populations. English is taught as a mandatory language in elementary school and is spoken and understood by approximately 80 % of the population. English is also used as a corporate language in many of the larger firms. It can even be said that English is a second language for some. Virtually all Danish business people have a good working knowledge of English and interpreters are rarely required. Emails are often written in English from the beginning to make it possible to involve colleagues or partners in other countries. In Denmark, the language used in a business setting for communication is English anyway, making the language the natural choice for everyday written communication.

Additionally, some Danes, mainly middle aged people, speak and understand German, young people however, do not learn German as a mandatory language in school anymore.

As stated above, Danish, Norwegian and Swedish are very much alike, and are understood by each of the countries’ populations. German is recognized as a protected minority language in the south of Jutland. French is spoken by one in ten Danes. Here are some useful phrases, which may help you to ‘break the ice’ in informal conversations.

There are no formal requirements for the formation of a contract. Offers, acceptances and contracts may be made orally, but a written contract is preferable. In the case of a dispute, the courts tend to interpret the contracts subjectively and look behind the wording to find out the original intentions of the parties.

It is important to create a good personal relationship with your business partner in order to reach a decision, although Danes do tend to be quite pragmatic in their business dealings. This would suggest that any shortcomings in personal relationships can be overcome, depending on the facts and good argument.

Danish workplaces are characterized by an absence of the hierarchical structure found in many other countries. The line of command between the boss and the employees is short, and in principle everyone – regardless of education, position or social status – is regarded as equal. It is common for employees to address their boss by her or his first name. Team work is common and open dialogue is promoted.

In many companies of Denmark, bosses are seen more as team leaders and group facilitators as opposed to being the key decision makers that delegate tasks to others. As such, employees are often encouraged to have a open communication about their opinions at meetings and everyone’s opinion is given consideration when making decisions. However, the final decision ultimately often lies in the hands of the group leader.

In accordance with Danish society, Danish work environments are seldom based upon hierarchies and formalities between various levels of management and as such, all workers, whether they be the top manager or the cleaner, are considered equally important. In addition to, danes are hardworking people and are keen that each minute spent at work is productive and used effectively. It is therefore important to arrive on time for both work and meetings.

Besides, business people should not routinely expect to meet with their Danish counterparts after 4 pm on weekdays. Do not plan meetings for Saturdays, Sundays, or on national holidays. Also, not all Danes appreciate breakfast meetings, which should be scheduled only with due consideration to the particular situation.

Danish business introductions are a formal and solemn exchange. If you are sitting and being introduced to a new contact or associate, be sure to stand up before extending your hand. Offer a firm handshake as you make eye contact.Needless to say that, any effort that you make to include a Danish greeting into your introduction [e.g., “Goddag” meaning “Good Day”] will be appreciated.

Most importantly, Denmark is a small and homogeneous country but naturally people living in different parts of the country have their own local identities as well. For instance, people living in the capital are quite distinct from those living in more rural areas. Seen from the outside, however, there are still some distinctive common features among all Danes. Spoken Danish varies considerably in pronunciation from region to region. However, there are not many who still speak pure dialects; most speak variants of them. The dialects are understood by people from other areas. In south Jutland there is a small minority of German speakers.

It is appropriate to use a person’s title until the use of first names has been indicated as being appropriate. Use professional titles when applicable. Otherwise, use the following Danish courtesy titles. Hr: Mr., Fru: Mrs., Froken: Miss. As outlined above, Danes tend to use first names quite early on in a business relationship.

Do you want to learn more about Danish business culture?